This article was originally published in 2015, and data/statistics in this article reflect that.

Offshore drilling companies are the first to feel the blow of dropping oil prices. No matter the size of the organization, a downturn hits stock prices across the board: Transocean, Ensco, Seadrill, Atwood Oceanics, and more. However, an immediate change in stock price is not always a true representation of performance.

Stock market valuations give us a sense of analysts’ speculations regarding a company’s future value. In reality, falling oil prices won’t impact drilling company operations for six to eight months.

Much of this lag is due to the long-term nature of drilling contracts. Large contracts are developed six to twelve months before a job begins. Offshore contracts usually last between one and six months. Consequently, drilling companies only recently feel the results of lower demand. Likewise, old contracts are paid out at rates set a year ago.

According to Scotia Bank Research, Saudi oil costs about $17/b and U.S. oil costs about $55/b, on average. Saudi Arabia’s refusal to cut production has created a 1.7 million barrel/day oversupply, forcing oil prices to unforeseen lows. In previous years, the Saudis have cut production with the intention of raising prices and margins.

Analysts and economists are proposing various motives and alternative causes for the refusal:

However, while low oil prices are a predominant factor impacting offshore drilling operations, the market is also saturated with a glut of new builds raised in the midst of the $100/b frenzy.

Below is a historical look at rig count fluctuations during other downturns: 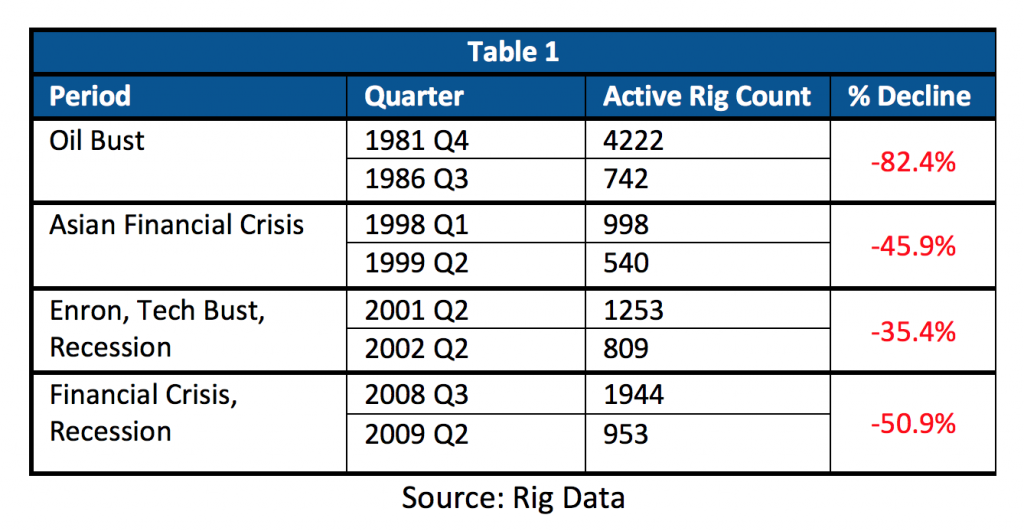 Rig Stacking – Based on historical rig counts (Table 1), it’s safe to say there will be fewer rigs utilized in the coming year. Old rigs and jackups are dangerous assets to own in excess when large producers move away from the shallows and into the deep, higher-producing basins to counteract bad oil economics. Companies with a high concentration of old rigs and/or jackups will suffer the most in this downturn.

Cost Cutting – Oil and gas industry veterans know that downturns are inevitable. Widespread cost cuts through layoffs and divestiture are standard early measures. This month, BP announced it will cut 300 jobs in the North Sea, Baker Hughes will lay off 7,000 employees, and Schlumberger will cut 9,000 jobs. If oil prices don’t rebound, expect more cuts across the industry.

Strategic Investing – In conjunction with divestitures and spinoffs, acquisitions are forthcoming. The fat cats (large companies with lots of cash) love the buyer’s market created by downturns. In the year ahead, smaller companies will shed excess assets to improve balance sheets. Bigger companies with liquidity will buy up assets or organizations to invest in their own futures.

Preparing for an Upturn

The most important question is: How long will this downturn last?

Historically, oil price drops and corresponding downturns last between six and eighteen months. This is generally enough time for demand to catch up with supply and for oil producers with high debt to exit the market. In other words, one year is the average amount of time the market takes to correct itself. We will likely see a price correction (toward $70-80/b) in the next 12 to 18 months, but expect a more volatile market going forward.

Offshore drilling companies who have prepared through investing in new rigs, cutting overhead costs, and selling off old assets will have fewer problems weathering the storm. Companies with excess overhead, debt, or old rigs will stack rigs, divest assets, and take other serious cost-cutting measures to survive.